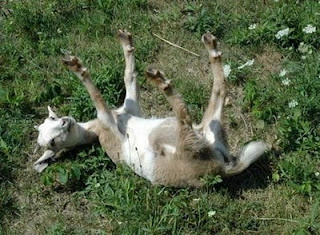 It's quite common for animals to have evolved specific, instinctive responses to high-stress situations. Some, like cats, or blowfish, puff themselves up to look bigger and more dangerous. Others, like possums, play dead to avoid attention. And then there are those famous fainting goats, an animal whose primary defense mechanism appears to be uncontrollably immobilizing itself and hoping for the best.

The congressional animal, as it turns out, has an instinctive response of its own: releasing high-profile deficit plans. And yesterday, faced with the stress of impending fiscal apocalypse, Congress did exactly that: churning out yet another deficit proposal, approximately the eight-hundredth this year.

But like those unfortunate goats, Congress seems to be hoping that things just aren't as bad as they seem, and if they stay in one place and do nothing different, all will turn out okay in the end.

Everyone's heard of the Gang of Six plan by now, right? To place it within the broad taxonomy of deficit plans, you should just know that it's nothing like the Ryan plan, and it certainly bears no resemblance at all to the very best deficit plan, which is "do nothing about the deficit." It doesn't look very much like the many small-bore plans being kicked around in connection to the McConnell proposal, either. But it shares certain features with a number of the many progressive budgets that came out over the first half the year, it's kind of similar to Obama's Grand Bargain, but more progressive, and very similar to the Simpson-Bowles plan from January, but without a spending cap.

In short, it's virtually indistinguishable from a number of ideas that have collectively gone absolutely nowhere at all. And yet, everyone in DC is buzzing about the proposal, which apparently won the approval of large swaths of the Senate. Why all the excitement? I have two theories.

First, I think the plan is more popular because it didn't originate with Obama. You could be forgiven for finding this confusing: the Republican caucus is forever insisting that Obama negotiate with them directly instead of using Harry Reid and Nancy Pelosi as proxy negotiators. But if you took that complaint as an indication that Republicans would actually prefer to strike a bargain with Obama, you'd be gravely mistaken. No, the reason Republicans want to negotiate with Obama is that he makes an excellent political foil for the party; House Republicans win more street cred when they spit directly into Obama's face. But by the same token, Republicans are far, far less likely to accede to any plan that bears Obama's imprimatur. Doing so would signal their complete defection to the dark forces of progressivism.

It makes sense, then, that there'd be more optimism about a plan that grew directly out of bipartisan congressional negotiations -- even if that plan is essentially a more progressive version of the bargain Obama already negotiated. It doesn't matter what the substance of the plan is -- the important thing is that it remain free of the taint of Barack "Public Enemy Number One" Obama. Which it was, for about twelve seconds. But since then, there's been a major hitch: Obama promptly endorsed the Gang of Six plan. That potentially puts us back on square one:

— A Senate Republican leadership aide emails with subject line “Gang of Six”: “Background guidance: The President killed any chance of its success by 1) Embracing it. 2) Hailing the fact that it increases taxes. 3) Saying it mirrors his own plan.”

The second reason for the explosion of optimism is even simpler. The Republican Party needs a way out of the mess they made. Polls seem to be turning against them. McConnell's escape hatch appears to be locked tight: House Republicans hate the idea almost as much as they hated the original compromise. Oh, yeah, and there's the minor issue of the financial doomsday clock that's not-so-slowly ticking down as we speak. Republicans have backed themselves into a corner on the debt ceiling -- many of them know they need to raise the ceiling, but they also know can't raise the ceiling without striking a deal with the devil. Given the circumstances, it makes sense that a lot of the GOP would enthusiastically jump at any new plan that emerges. Their relief is almost palpable.

The problem is that neither of these things actually addresses the real impediments to raising the debt ceiling, which are, and always have been, an unyielding deadline and an unyielding House Republican caucus. There are two key obstacles for the Gang of Six plan:
Gang of Six supporters seem to think that if they talk about bipartisanship enough, the partisans gumming up the works will just fade away. Out of sight, out of mind, I guess. But they're wrong. Winning bipartisan support in the Senate might be worth bonus points with the Washington Post, but it does nothing to solve the dilemma at hand. In other words, Washington's optimism is badly misplaced. The political press and Senate Republicans cannot simply freeze in place and wait for a debt ceiling solution to conveniently emerge.
By WHS at 11:38 AM