Let me be the first to say it: this is completely un-American. 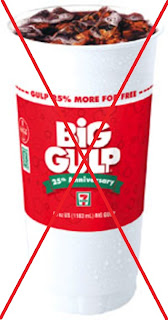 Bloomberg plans a ban of large sizes for sugared drinks


The proposed ban would affect virtually the entire menu of popular sugary drinks found in delis, fast-food franchises and even sports arenas, from energy drinks to pre-sweetened iced teas. The sale of any cup or bottle of sweetened drink larger than 16 fluid ounces — about the size of a medium coffee, and smaller than a common soda bottle — would be prohibited under the first-in-the-nation plan, which could take effect as soon as next March.


At fast-food chains, where sodas are often dispersed at self-serve fountains, restaurants would be required to hand out cup sizes of 16 ounces or less, regardless of whether a customer opts for a diet drink. But free refills — and additional drink purchases — would be allowed.

Capitalist ingenuity defeats fascism yet again!
By WHS at 1:25 PM No comments: